Dimension of the Court

The Playing Court is a rectangular measuring 16 M x 8 M, surrounded by a rectangular free zone of minimum 5 M from the playing surface for Doubles and 16 M x 7 M for singles.

The playing surface should not have any danger which may create injury to the player. It is forbidden to play on rough, wet or slippery surface, e.g. cement, sand etc

The court may have a slope of 5 mm for drainage.

All lines shall have a width of 5 cm, they must have a contrast color to the floor.

Two side lines and two base lines shall mark the playing court, both sides of base lines are included from the 16 x 8 m. playing are for doubles match and 16 x 7 m for singles match.

The axis of the centre line divides the playing court into two equal court and measuring 8 x 7 and 8 x 8 m each. This extends beneath the net from side line to sideline.

On each back side of the court, the Restricted service area is limited by the service line which is parallel to Base line and at the 2 m distance from it inside of the court from base line.

Court line, which is parallel to the side lines divides the court from restricted service line to the center line in the two equal parts call as court line.

The area bounded by the court lines, sideline and restricted service zone lines to centre line is service court.

Two lines each 10 cm long mark indentify the side limit of the service zone at the end of each courts.

They shall be drawn 15 cm behind and perpendicular to the base line, one is drawn as an extension of side and other is of court line.

Lighting on court should be 500 to 1500 fluxes measured 7 m high from the playing surface. 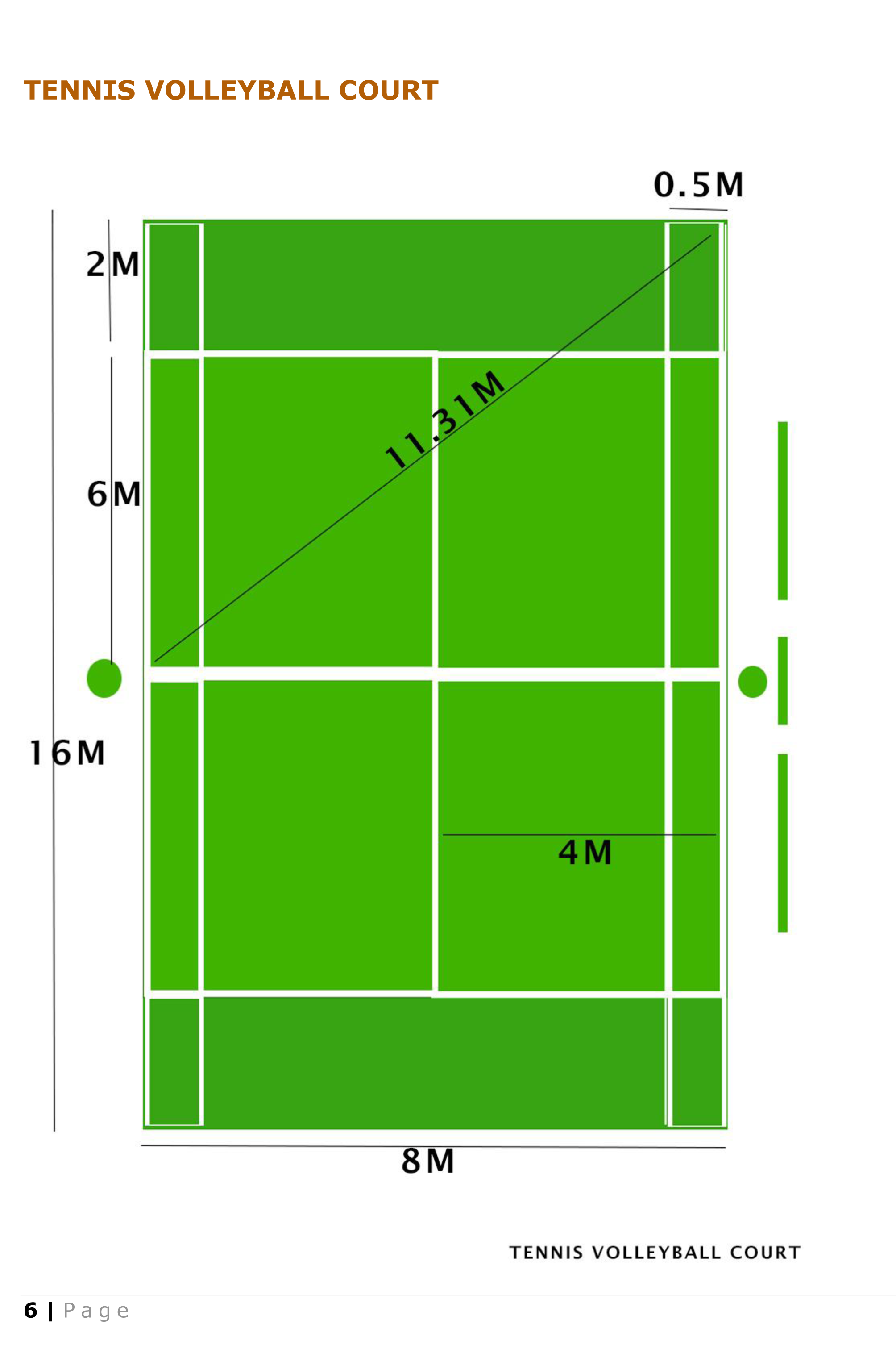 The net shall be made of fine natural cord or artificial fiber. The length of the net shall be 9 m and width shall be 1.10 m with mesh of 10 cm sq. width and 90 mesh in length

The ball shall be spherical, made of a flexible leather or synthetic leather case with a bladder inside made of rubber or similar material.

Only the players recorded on the line up form shall participate in the match.

Out of six players one player will be the captain of that team.

The team captain indentified with a ribbon or strip of 8 cm x 2 cm in size and will be placed on the left side of the jersey of the player.

When the team captain is injured or he has left the tournament , the coach will assign another player as a captain.

Uniform of the Player

Players uniform shall consist of a jersey and shorts of same color and with number on front and backside.

The Player shall have suitable shoes as he desire.

The captain must have an identification on the arm, noting that he/she is the captain of the team.

The Player must not have any thing on their jersey that might impede the game.

Rights and responsibilities of the Player

The Player must know the rules of the game and abide by them.

The Player must accept the referee’s decisions, should not argue against the decision

The captain shall represent the players and be responsible for the actions behavior a comments of the team.

The captain shall conduct the following :

a)To submit the playing order sheet to the official.

b) Choose the court or service after the toss.

c) Sign the records at the end of the match

Responsibility of the Coach / Manager

Prior to the game , he must register, check the names and numbers of his players on the score sheet and place his signature on it.

The coach / manager shall read the team and be responsible for the actions moments of the team.

The coach / manager shall conduct the following :

a) Designate the captain.

b) Indicate the absence of a player.

c) During the match he must sit on players bench beside the scorer.

PREPARATION AND DEVELOPMENT OF THE MATCH

Toss up and warming-up at the Net

Before entering in the court, the referee carries out a toss up in the presence of the two team captains. The winner of the toss chooses the court or the right to serve first. This is Applicable for every match, Single or Double and Reverse Single.

Prior to the match each team will have 5 minutes warm-up period at the net, if they previously had another playing court at their disposal, if not they may have 5 minutes.

If both captains ask to warm-up at the same time both teams may at the net for 5 minutes according to above.

In the event of consecutive warm-ups, the team that has won the right to serve takes the first turn at the net.

Team Line up, Location of participants & the match

Before start of set each coach must present his standing line-up sheet to the scorer or the referee.

The six players those who are going to play compose the line-up of a team. The number of six players may be reduced up to four.

The four players will have to play game of three sets of each match single Doubles and Single if necessary.

Out of Four two different players have to play two match of singles & Another two players from the same team must play the one match od doubles.

There may be three sets for both singles & doubles i.e. for each game.

The team which win first singles & doubles need not play second singles but if it looses one game of the same may have to play deciding game i.e. reverse singles.

Each set may be played of 21 points.

For both singles & doubles the players or the pair scores 21 points first may be declared as the set.

The non-playing team players & coach must sit on the bench located on the side of their own court beside the scorer.

The non-playing team members may cheer and applaud their teammates but not give them instructions.

The winner of the toss decides to accept the choice of court or the right to serve. The first service of the 1 & 3 game i.e. both singles will be given to the team choosing the right to do it after the toss, the other sets & the game double will be started with the service by the team they did not serve first in the previous set.

The ball is then thrown in to the air above shoulder level and stuck with his one hand before it hits the ground. It must land in the receiver’s right hand court to be “in”. The server has only one chance to make a good service after which the service is lost.

The player shall stand on the opposite side of cross court of the net, the player who first delivers the ball shall be called the server and other opponent as the receiver.

The server shall touch the base line throughout the delivery of service.

The server should not change his position by walking, running or jumping during the service.

The server shall not touch, with either foot, any area other than that behind the base line.

The server both feet should touch the floor at the time of service.

The ball served shall pass over the net and hits the ground within the service court which in diagonally opposite.

If the server commits any break of rules.

If server misses the ball in attempting to strike it.

If the ball served touches the net or post before it hits the ground.

If the ball is served under armed.

If the served ball hits the ground other than service court.

Player of the serving team (in doubles ) must not through screening, prevent their opponent from watching the server or the trajectory of the ball.

The server shall not serve until the receiver is ready. If the latter attempts to return the service, he/she shall be deemed ready and after giving the signal by referee to serve it.

PLAYING WITH THE BALL AND ITS FAULT

Ball in play and its faults

The ball is in play from the service hit to the moment.

Ball lands on the side-lines or base-line.

A player carries the ball

A player Continuously touched the ball twice or the ball is touched twice to the player.

A player falls or touches the net or the posts after playing the ball.

The served ball is received by the wrong player & not by the receiver.

The served ball is touched by player before one bounce.

Ball at the Net

The ball must cross the court in vertical plane of the net within the crossing space i.e. 8M horizontal and in case of indoor 15M high.

Penetration into the Opponent’s space and court

Each team must play within its own court & related space i.e. (free zone) excepts in the following cases :-

Hands crossing the vertical plane of the net.

During the block it is not permitted to contract the ball above the net within the opponent’s space.

While the attack hit is permitted to cross the hand over the net if the contact was made in the player’s own playing space.

It is forbidden to contract the net all along its length including the side poles.

When a ball is driven in to the net and which causes the to contract an opposing player, no fault is committed.

When participants commits faults during the game due to actions contrary to the rule or due to misconduct, the first referee judges the faults and determines the sanctions applicable, in accordance with the following principles :-

These are individual actions or team movements contrary to the rule of the game and they consist of :-

Not sending the ball correctly over the net into the opponent’s court.

Carrying out an action stipulated in the rules as a fault.

Consequences of a fault

There is always a penalty to a fault.

If two opponent’s commits a fault simultaneously the penalties cancel each other and a play-over is called.

Behavior towards officials, opponents, spectators or teammates may be incorrect, and depending upon the degree of the offence, conduct must be sanctioned as :-

Un-Sportsman like conduct : If a participant delays the game, coaches the team when it is forbidden to do so, shouts, intimidates the opponents or argues with the players, referee or spectators.

Rude conduct : If the participant acts contrary to good manners, moral principles or his action is the expression of contempt towards the referees, opponents or spectators.

Offensive conduct : If any aggressive attempts at personal honor is made by means of insulting words and gestures to a referee on opponent or a spectator.

Aggression : If a real, physical attack or an initiated aggression against a referee, an opponent or the spectator is made.

Depending on the degree of the incorrect conduct according to the judgment of the first referee, the sanctions to be applied are :-

Penalty, for rude behavior : It must be registered on the score sheet and the opposing team will gain a point or the service.

WINNER OF THE MATCH

Winner of the Set

Winner of the Game

A player or a pair wins any 2 sets out of 3 will be declared as the winner of the game. (i.e. singles or doubles)

Winner of the Match

A team which wins 2 games out of 3 those 2 singles and one doubles will be declared as the winner of the match.

Tennis volleyball is very interesting game, which provides the joy and satisfaction to every human being of any age. This game provides the all-round fitness and prevention of all diseases.

Become a Fan On Google+